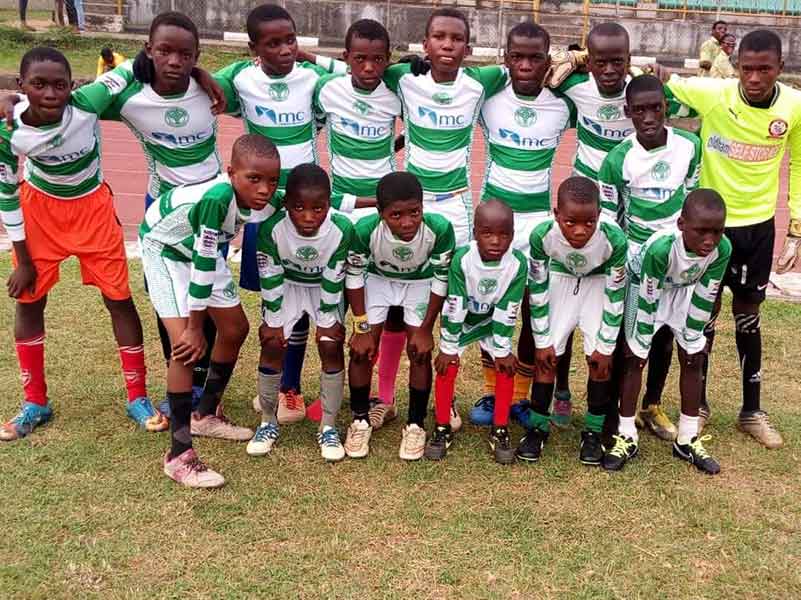 A former international soccer player is making sure unwanted football kits and equipment from junior clubs across Greater Manchester are being put to good use – thousands of miles away in Africa.

For several years, former Nigerian international Chuks Akuneto has been collecting redundant strips, boots, shin pads and goalkeeping gloves and sending them to his native country and Kenya for less fortunate youngsters to wear.

So far, over 200 young footballers have benefited from his initiative and the latest to receive a kit is the Success Youth Club’s under-11s squad, based in a suburb of the capital, Lagos.

Their green and white hooped kit was previously worn by a team at St John’s Junior Football Club in Chorlton, sponsored by MC Construction.

Chuks, 41, who manages the St John’s under-7s squad, is a Manchester Football Association tutor and coach mentor who in his playing career represented his country four times. He played professionally for clubs in Cameroon, India, Malaysia, Russia and Vietnam as well as in Nigeria.

He came to England after he retired and held a variety of coaching and management roles at FC United from 2008 to 2014.

In addition to St John’s, Chuks has collected unwanted items from clubs including Curzon Ashton and Droylsden FC, and has shipped them to Africa.

“I grew up in Lagos and benefited from people who handed down their kits to me and enabled me to have a career in football.

“I found that in England many old kits were thrown out or left to gather dust in a cupboard, so I thought it would be a good idea to collect them and send them to my contacts who distribute them to less fortunate children, whose parents cannot afford to buy boots, a strip or other equipment.

“We’ve had lots of messages of appreciation from clubs and families in Nigeria and Kenya.

“It’s my way of giving back as a way of saying thank you for what I’ve gained from football, as it gives kids in Africa the opportunity to go and enjoy playing the sport.”

The MC Construction-sponsored kit was worn by the current under-11s at St John’s from under-7s to under-9s level.

Among the boys in the St John’s team is the son of company director Chris Purcell.

“Every few years, teams get a new sponsor and we collect the old kits once they are outgrown. They are usually still in good condition and we don’t want them to go to waste, so it’s great to be able to pass them on to children who would otherwise go without.

“In turn our boys can understand that others are less fortunate and that they can help children in another part of the world.”

“We are proud that our sponsored shirts have contributed to Chuks’ fantastic and worthwhile initiative.

“Both of my children currently play for St John’s and it’s a great way for the club to help other youngsters who are less fortunate.”

If you have any unwanted kit or equipment that you would like to donate, contact Chuks via Chukwuma.Akuneto@ManchesterFA.com or 07837 639004.