Manchester and Cheshire Construction are featured in the March 17th issue of Greater Manchester Business Week. A copy of the article is reproduced below;

Construction boss Dave Lowe knows more than most about the value of apprenticeships.

He joined the family firm, Manchester & Cheshire Construction, straight from school as an apprentice bricklayer.

Today, 35 years on, he is its managing director, leading a thriving £10m-turnover enterprise with 55 staff, including seven apprentices.

Manchester & Cheshire is based in Salford and undertakes projects throughout the north west, with a focus on the commercial, education, retail, industrial, residential and conservation sectors.

The firm currently has a record number of apprentices on its books who are working towards qualifications in joinery, plumbing and quantity surveying.

Dave, 51, is a passionate advocate of apprenticeships, and is proud of the firm’s track record for nurturing talent.

‘We are not just giving them jobs – we offer careers.’

‘Hazel Lovell, who joined as a trainee in our administration team, has progressed to be our procurement manager, and there are lots of other examples of people who have gone on to roles in management after coming as apprentices.’

‘It’s brilliant to see them progress. They move around departments, so they get to understand different aspects of the business, and this helps them in their career choices.’

‘It may take more management, but it’s proved a successful strategy. Those who are switched on and have the right work ethic can go on to achieve great things.’

‘We want people who come here to make a difference. We really throw them in at the deep end – they are quickly out there running some jobs under supervision.’

‘Some people are surprised by the amount of responsibility we give our apprentices, but we find that they gain a lot by interacting with clients and taking on responsibility.’

‘I really like giving young people a chance in this industry and to champion construction as a career. There are so many opportunities.’

‘The company as a whole benefits from having them – they add an enthusiasm and energy to the business which ripples through the rest of the workforce.’

Dave joined Manchester & Cheshire in 1981, a decade after his father Charlie founded the business with John Purcell.

Dave qualified as a bricklayer then went on to become a site manager, construction manager and contracts manager before being appointed a director and joining the board in 2001.

He became MD in 2011, and says he still has to pinch himself on occasions when he thinks about his role.

‘Dad was pretty hard on me and never showed me any favouritism. Once I had broken an arm, but the day I had the plaster removed I was back laying bricks.’

‘On another occasion I’d broken a foot, but in those days I would not get paid if I didn’t work. We were building a house in Hale Barns and I was on site with big boots and a cast!’

‘I suppose I got a bit of respect because I was prepared to graft. With hard work, you can achieve anything.’ 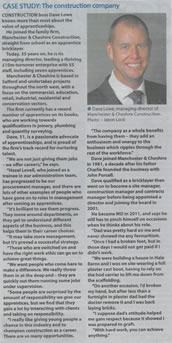