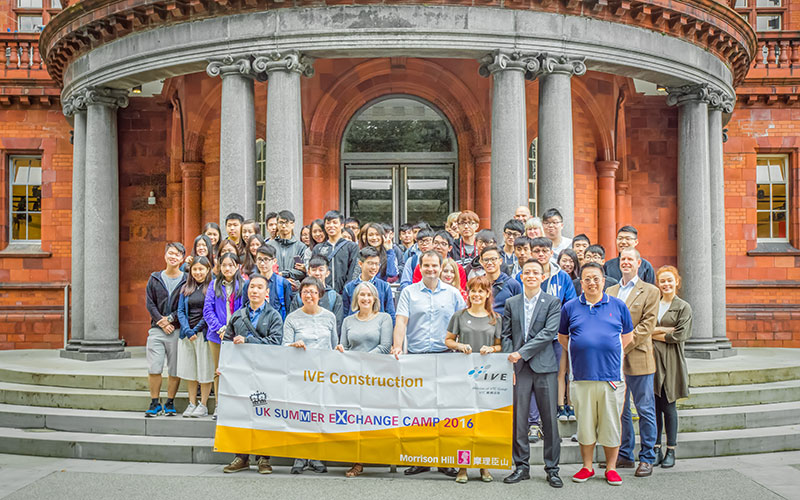 Students from Hong Kong were given a VIP tour of an award-winning heritage restoration project in Manchester during a visit to the north west.

The delegation went behind the scenes at the Whitworth, University of Manchester, to hear about its recent £15m redevelopment, which has earned the attraction several national accolades, including ones from the Royal Institute of British Architects.

The tour was organised by Manchester & Cheshire Construction, a key contractor on the scheme, after an approach from the Hong Kong Vocational Training Council.

Forty-two young people from the Hong Kong Institute of Vocational Education, a member of the VTC, were in Britain for a study tour to learn more about the UK’s construction industry.

The participants are studying for qualifications in building studies, surveying and building technology with interior design.

Accompanied by three teachers, the group spent time at the University of Central Lancashire and Coventry University.

The organisers were also keen to learn about the work of a successful British company and got in touch with Manchester & Cheshire, which has close ties to the Far East.

Development director Mike Purcell has previously worked on major projects in Hong Kong and the firm recently formed the Anglo-Chinese Alliance with Chongqing Jinstar Real Estate Development Company from China for the delivery of large residential projects in Greater Manchester.

Mike and Manchester & Cheshire managing director Dave Lowe accompanied the group on their visit to the Whitworth along with Steve Yang, Jinstar’s director of international co-operation.

Dave explained that employing a direct labour force has been a major reason for the firm’s continued success, while Mike used his knowledge to highlight some of the key differences between construction practices in Britain and Hong Kong.

Nicola Walker, the Whitworth’s head of collections care and access and its client co-ordinator on the project, presented a history of the art gallery and led the group on their tour.

‘We were delighted to be invited to assist the group with their studies during their visit to the north west, and decided to make the Whitworth our focus.’

‘It provided a golden opportunity for the students to get close to a great heritage project, and to learn about advanced construction ideas.’

As part of the scheme, Manchester & Cheshire refurbished the Grand Hall and created an external sculpture terrace and new access routes, while also carrying out roofing improvements.

The projects preserved the gallery’s original character, for example by reusing original stone, terracotta coping units and bricks wherever possible, and marble floor tiles were re-laid in their original position in the gallery’s entrance lobby. Any sourced materials were supplied to heritage specifications.

Significant features were the opening up of the original Grand Hall and staircase, and the barrel-vaulted ceilings of the exhibition galleries.

MUMA won a north west regional RIBA award for conservation for its sensitive approach to the historic building. Meanwhile, green energy measures such as the installation of ground source heat pumps are designed to reduce the Whitworth’s carbon footprint.

Mike said the students were fascinated by what they saw and learnt during their visit.